"Divertimento" - orchestral suite from the ballet "Kiss of the Fairy" for a symphony orchestra
“Rhapsody in Blue” by George Gershwin for piano and orchestra
Concert performance of the opera "Porgy and Bess" for soloists, choir and orchestra

A grand concert in the Great Hall of the Conservatory will combine the music of two great composers of the twentieth century - George Gershwin and Igor Stravinsky. Both of them were destined to change the course of musical history and create masterpieces that continue to amaze listeners after many decades. New York was the birthplace of Gershwin, the son of immigrants from Odessa. The USA became the second homeland for Stravinsky, who lived there for 30 years. America united the fates of two such different geniuses, and their music in Moscow will be presented by an international team of performers.

Among the whole pleiad of brilliant American composers, George Gershwin remains the number one figure in our country. Colossal success on Broadway, collaboration with Paul Whiteman's jazz band — all this made Gershwin a national hero, but it was “Rhapsody in blues” for piano and orchestra and the opera Porgy and Bess that immortalized his name. Their sincerity, charm, extraordinary sincerity and beauty combined with modern drive - all this conquers today just as it did almost 100 years ago.

These two compositions were included in the program of the concert. In the first part, “Rhapsody in blues style” will sound, the part of solo piano will be performed by Basinia Shulman - one of the most prominent Russian pianists, who pays great attention to non-academic areas, improvisation and crossover.

In the second part of the audience, fragments of the opera Porgy and Bess await. Jazz and blues motifs and Negro folklore sounded in the opera scene for the first time, so American stars of the opera scene baritone Reginald Smith Jr. and soprano Michel Bradley come to Moscow especially for this concert. Thanks to their skill and sense of style, the melodies of the famous opera will really sound. Together with them, the Russian Philharmonic Symphony Orchestra and the Masters of Choral Singing Academic Choir will appear on the stage. At the conductor's stand - Dmitry Korchak.

In the first part there will also be “Divertimento” - an orchestral suite from the ballet “The Kiss of the Fairy” by Igor Stravinsky. This spectacular composition for orchestra based on the tale by G. H. Andersen “The Ice Maiden” was written based on the melodies of Pyotr Ilyich Tchaikovsky, whom Stravinsky loved and respected. The premiere took place on the stage of the Paris Opera, and ballet quickly gained popularity throughout the western hemisphere. Since Stravinsky’s “modernist” didn’t complain too much, and was banned in the USSR for a long time, the Fairy Kiss remained unknown to us for a long time. However, this is a delightful music that combines the colorful and expressiveness of romanticism with the pulse of the new time, and which you should definitely hear at least once.

Dmitry Korchak is a famous Russian tenor and conductor. He graduated from the conductor and vocal faculties of the Academy of Choral Art. V.S. Popova. From 2003 to 2007 he worked in the Moscow Theater Novaya Opera. E. V. Kolobova. Since the beginning of the season 2017/2018 - the main guest conductor of the Novosibirsk Opera and Ballet Theater.

For the role of Mimi in Puccini's La Boheme, staged on Broadway by director Baz Luhrman and also shown in California, Janina won the Ovation award from the Los Angeles Theater. In 2008 she was awarded the Sullivan Award.

She has performed on the stages of such theaters as the Metropolitan Opera and the New York City Opera, the Theater du Châtelet (Paris), the Deutsche Oper Berlin, the Teatro Nacional de Saint-Carlos (Lisbon) and the Cape Town Opera. He performs a lot in concerts. 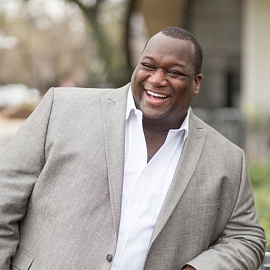 Reginald Smith, Jr. (baritone) is a graduate of the Houston Opera Studio and winner of the Grand Final auditions of the 2015 National Metropolitan Opera Council. He is noted as a “passionate performer” (New York Times) with a “breathtakingly dramatic” voice that is “one of the most amazing baritones that has appeared in recent years” (Opera News).

Smith performs on the stages of all major US opera houses and collaborates with a number of symphony orchestras. In the season of 2018-2019, he performs leading roles in the Chicago Lyric Opera, in the opera houses of San Francisco, Memphis and Idaho, and performs with the Houston Orchestra and the Orchestra of New Jersey. In his repertoire of the party: Count Almaviva (Mozart's Figaro's Wedding), Amonasro (Verde's Aida), Georges Zhemon (Verdi's Traviata), Sharpless (Puccini's Madame Butterfly), Taddeo (Rossini's Italian in Algeria) , Marcel (“La Boheme” by Puccini), Capuleti (“Romeo and Juliet” by Gounod), Porgy (“Porgy and Bess” by Gershwin). Concert repertoire includes solo parts in Handel's Messiah, The Coronation Mass and Mozart's Requiem, Beethoven's Solemn Mass, Belehoze's Romeo and Juliet, Edelie Mendelssohn, German Requiem by Brahms, Ode Napoleon Schönberg, Ormin's Carmina Burana, as well as the writings of Schubert, Britten, Faure, Durufle and others.